On any given ride, we are presented with countless signs along the way that were strategically placed to guide us and warn of potentially dangerous situations. But how much attention do we pay them? From what I’ve observed over the years, riders often fail to heed all but the most intrusive warning signs posted along the roadway. Are they choosing to ignore the warnings? Are they seeing them as merely conservative suggestions? Or are they simply not seeing them at all? I’m thinking it’s more a matter of volume. With so many signs out there screaming to us in bright yellow, it’s easy for us to become somewhat desensitized to them. Especially when so many of them don’t seem to require any specific or dramatic response. So how can we make certain we don’t miss critical messages? Are there certain road signs that suggest more of a threat to riders than others? I suggest that there are. 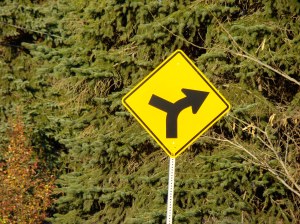 Right curve with intersecting road to the left 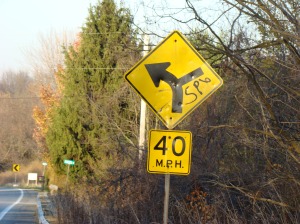 For starters, consider the two common signs shown here. Each represents a routine curve to either the left or right. And each indicates there is a junction with a side road at some point mid-corner. Although neither sign appears to suggest a higher level of priority over the other, one does present a particularly increased threat for the rider. Granted, any intersecting road deserves our undivided attention, but the curve with a junction to the right is of particularly great importance, especially on a blind curve. There is an increased risk of left-turning vehicles who will cross our path of travel as we execute the turn. And, as we all know, traffic crossing our lane is the leading cause of multi-vehicle crashes. By making this sign — the left bend with a junction to the right — a high priority, we can make a more conscious point to be on the lookout for it, and then take precautionary action to avoid a conflict.

Approaching a blind curve with a side road to the right

The photograph above shows a rider who is staying to the outside of the curve, thereby increasing his line of sight and giving himself the most advanced visual warning of turning cars possible. He slows as he approaches, leaving enough space to stop completely within the distance he can see ahead should he need to. He’s far enough behind the car ahead to avoid being hidden from oncoming traffic, yet not so far back as to invite an oncoming driver to turn between him and the car ahead. In addition to scoping out a potential left-turning car, he also scans to the right in anticipation of a vehicle waiting at the intersecting side road and any other vehicle lurking beside it that may be waiting to turn right onto our lane but is “eclipsed” (hidden by the first vehicle).

These are just two of the many signs we encounter. What other signs do you consider to be highest priority for motorcyclists?